The Transmission Agency of Northern California (TANC)/California-Oregon Transmission Project (COTP) Wildfire Mitigation Plan (Plan) was developed consistent with the requirements of Senate Bill (SB) 901, as codified in California Public Utilities Code (CPUC) Section 8387. TANC’s objectives for the TANC/COTP Plan and for minimizing the threat of catastrophic wildfire attributed to its facilities and complying with SB 901 include the following:

TANC has updated the TANC/COTP Plan for 2021. The 2021 TANC/COTP WMP and its associated submittal letter were uploaded to the Office of Energy Infrastructure Safety e-filing system in early July 2021.

TANC has updated the TANC/COTP Plan for 2022. The 2022 TANC/COTP WMP and its associated submittal letter were uploaded to the Office of Energy Infrastructure Safety e-filing system in early June 2022.  Comments will be accepted at info@tanc.us 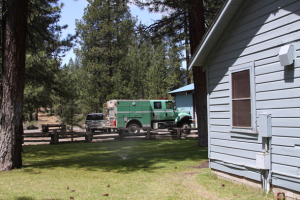 TANC and the U.S. Forest Service have long recognized the potential dangers associated with wildfires near major transmission lines. Under a series of mutually beneficial agreements, TANC and the Modoc National Forest cooperated in funding the construction, operation, maintenance, and fire-season staffing of the Long Bell Station and fire engine located in the northeast corner of California known regionally as “gasoline alley” because of the historic frequency and severity of wildfires that have occurred there. Because of TANC’s historic role and responsibilities associated with the Long Bell Station, the Modoc National Forest ensures that an engine is always available for responding to wildfires that could threaten the COTP and grid reliability in this area.

The fire engine has responded to an average of 8 to 10 wildfires every fire season since 1991 and serves as an important command and training center for joint fire response campaigns in this remote region. Recently, the Long Bell Station, engine, and crews partially funded by TANC were very involved in the firefighting and subsequent fire suppression activities associated with the Tucker Fire which ignited on the afternoon of July 28, 2019 and ultimately spread to 14,150 acres before it was contained in August 2019. Facilities, equipment, and staff, like those at the Long Bell Station, have, and continue to serve as first responders to fires that could threaten the reliability of the three major transmission lines, between the Pacific Northwest and California that comprise the California-Oregon Intertie (COI). 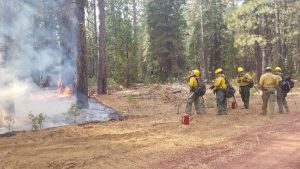 TANC and the Modoc and Shasta-Trinity National Forests have been cooperating for over 25 years on projects intended to reduce the buildup of vegetative fuels that could exacerbate wildfires near the COI. During that period, TANC has funded over 10,000 acres of vegetative fuel reductions near the COI through U.S. Forest Service-supervised prescribed under-burns (see photo to the right), fuel break construction and maintenance, hand and mechanical removal, thinning, and mastication projects. 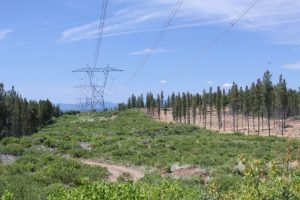 Recent mastication projects have resulted in substantial reductions in ladder fuels adjacent to the COTP right of way (see photo below). Local vegetation management and hauling contractors are usually hired by the U.S. Forest Service to perform the work that is supervised by U.S. Forest Service staff with extensive training in fuels management. These fuels treatments have contributed over 28,000 tons of biomass to the local economy.