The Western US Power System

The U.S. bulk transmission system is a complex network of independently owned and operated power plants and transmission lines. Extra-high-voltage connections between individual utilities permit the transfer of electrical energy from one part of the network to another. This system, also referred to as the power grid, has evolved into three large interconnected systems that move electricity around the country. The three networks are: 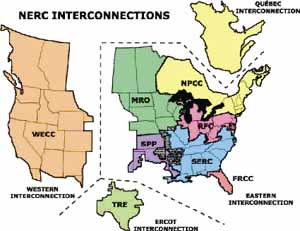 The Western Interconnection is the geographic area containing the synchronously operated electric grid in the western part of North America, which includes parts of Montana, Nebraska, New Mexico, South Dakota, Texas, Wyoming and Mexico and all of Arizona, California, Colorado, Idaho, Nevada, Oregon, Utah, Washington and the Canadian provinces of British Columbia and Alberta.

Formed in 2002 by the merger of the Western Systems Coordinating Council (WSCC) and two regional transmission associations, WECC encompasses the entire Western Interconnection and covers more than 1.8 million square miles. WECC’s members, representing all segments of the electric industry within the Western Interconnection, provide electricity to 71 million people in 14 western states, two Canadian provinces, and portions of one Mexican state.

WECC’s predecessor organization, WSCC, was organized in 1967 to facilitate electric industry coordination in the planning and operations of the electric system in Western North America. Similarly, WECC’s mission today is to: 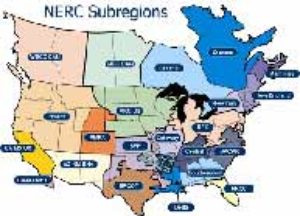 Data gathered from the four different Reporting Areas (or NERC Subregions as shown) allows WECC to carry out the mission and perform four organization roles:

Power Flows Within the WECC 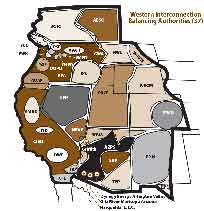 Due to the vastness and diverse characteristics of the region, WECC’s members are faced with unique and challenging problems in coordinating day-to-day interconnected system operation and t

Power Supply Adequacy – Consistent with the requirement to maintain operating reserves as defined by WECC and NERC operating policies, WECC conducts, on a seasonal basis, an assessment of generating reserve margins and transmission limitations between load and resource areas as well as probabilities of supplying expected load levels, accounting for uncertainties.

A Balancing Authority (BA), or Control Area, generally comprised of large and small transmission owners, is the responsible entity that matches loads to resources within the system, maintains scheduled interchange between control areas, maintains frequency within reasonable limits, and provides sufficient generation capacity to maintain operating reserves. Load and resource data submitted by the BA to WECC is used to identify areas that have the potential for electricity supply shortages.

The map below provides an example of a power flow scenario in the WECC area. 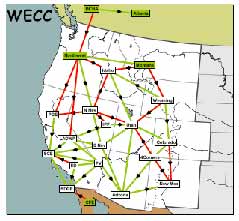