The majority of major transmission lines in the U.S. are either 230-kilovolt (kV) or 500-kV alternating current lines. In some cases, 115-kV lines are used. Lower voltages are far less efficient for moving electricity across hundreds or thousands of miles to where it is needed without losing a significant amount of energy.

For safety reasons, the higher the voltage, the more distance is needed between the conductors and other objects such as trees, buildings or the ground. Though it is largely dependent on the surrounding terrain and the voltage level of the transmission line, in general, overhead high-voltage transmission lines are typically at least 30 feet off the ground. 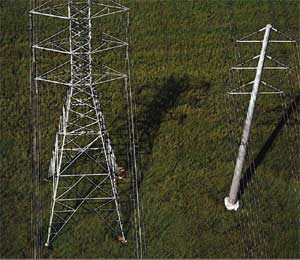 Lattice steel towers are more prevalent and common, and they come in several familiar shapes and sizes. These can be supported by four concrete footings, or a combination of concrete footings and guide wires. The number of conductors going between each tower depends on whether the transmission line is single circuit (three wires) or dual circuit (six wires).

Tubular steel towers are relatively new; they consist of a single steel pole anchored into the ground. These can be more visually appealing than their lattice steel counterparts, although historically they have been more costly to construct and can result in increased maintenance costs and requirements.

Reliability standards are closely related to clearance requirements. In short, this means ensuring the lights will stay on in the event of a tower collapse of other major failure along the line.

It is possible to bury transmission lines underground instead of building an overhead system connected by a series of steel towers, but there are tradeoffs and requirements for public safety and the environment. Beyond the increased cost of undergrounding transmission lines (10 to 30 times greater than overhead construction depending on voltage), the main issues are heat and environmental impacts.